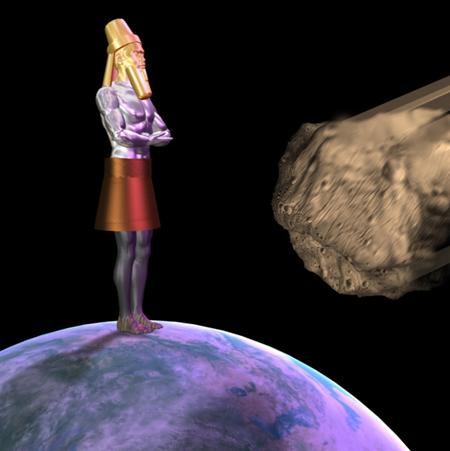 “As Your Majesty was lying there, your mind turned to things to come, and the revealer of mysteries showed you what is going to happen. As for me, this mystery has been revealed to me, not because I have greater wisdom than anyone else alive, but so that Your Majesty may know the interpretation and that you may understand what went through your mind.

“Your Majesty looked, and there before you stood a large statue—an enormous, dazzling statue, awesome in appearance. The head of the statue was made of pure gold, its chest and arms of silver, its belly and thighs of bronze,  its legs of iron, its feet partly of iron and partly of baked clay.

While you were watching, a rock was cut out, but not by human hands. It struck the statue on its feet of iron and clay and smashed them. Then the iron, the clay, the bronze, the silver and the gold were all broken to pieces and became like chaff on a threshing floor in the summer. The wind swept them away without leaving a trace. But the rock that struck the statue became a huge mountain and filled the whole earth.  Daniel’s book, chapter 2.

(Esther was taken as queen of the King Ahasuerus (same as ArtaXerxes) and used his position to save the Jews of Persia from persecution. She was also present when the king gave Nehemiah permission to rebuild Jerusalem and the temple).

East and West divides into 10 final kingdoms. The 10 toes are the very same as the 10 horns at the beast in Revelations 13.

– The legs of iron :
The Roman Empire, from 168 BC and on to the present day in the shape of unions.  The empire divided into two parts, east and west, from the year 395 AD. The WEST dominated by the Catholic church. The EAST dominated by the Orthodox Church.

WEST: The last Roman emperor gets deposited in the year 476 of the German leader Odovakar. Later arises German–Roman Empire (Holy Roman Empire). It lasted 1000 years, until the Napoleonic wars. During this period of 1000 years the Vatican had a special position where the pope could appoint or dismiss emperors, as well as conduct inquisitions and pogroms. Pope Urban II initiated the First Crusade to conquer Jerusalem. On the way to Jerusalem the Crusaders would kill all the Jews they could locate. Even the king of Norway, Sigurd Jorsalfare, participated as crusader with a force of 6000 men.

EAST: The East Roman Empire, Byzantium, had many wars against the West Romans, Crusaders, Ottomans and Persians. The Persians were defeated by the East Roman Emperor Heraclius in 627. Byzantium went under when the Ottoman sultan Mehmet conquered the capital Constantinople in 1453. But the Orthodox Church survived in many countries.

10 toes is like 10 “kings”;  political blocks/regions similar to the USA, European Union, African Union and the restored Sovjet.

The Anti-Christ will deceive the 10 unions (regions) with his economic system and the mark of the beast.

10 regions or zones according to the Club of Rome. Later EU and UN have made modifications to this map. 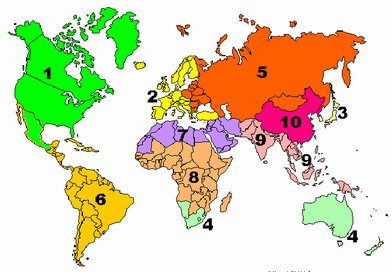 .
– The stone from the mountain:
In the time of those 10 kings, the God of heaven will set up a kingdom that will never be destroyed, nor will it be left to another people. It will crush all those kingdoms and bring them to an end, but it will itself endure forever. This is the meaning of the vision of the rock cut out of a mountain, but not by human hands—a rock that broke the iron, the bronze, the clay, the silver and the gold to pieces.

1000 years of peace, Jesus Christ as King of Kings and Lord of Lords.

Daniel 7, 14:
He was given authority, glory and sovereign power; all nations and peoples of every language worshiped him. His dominion is an everlasting dominion that will not pass away, and his kingdom is one that will never be destroyed.
.

To the one who is victorious and does my will to the end, I will give authority over the nations— that one ‘will rule them with an iron scepter and will dash them to pieces like pottery’— just as I have received authority from my Father.

And I saw an angel coming down out of heaven, having the key to the Abyss and holding in his hand a great chain. He seized the dragon, that ancient serpent, who is the devil, or Satan, and bound him for a thousand years. He threw him into the Abyss, and locked and sealed it over him, to keep him from deceiving the nations anymore until the thousand years were ended. After that, he must be set free for a short time.

I saw thrones on which were seated those who had been given authority to judge. And I saw the souls of those who had been beheaded because of their testimony about Jesus and because of the word of God. They had not worshiped the beast or its image and had not received its mark on their foreheads or their hands. They came to life and reigned with Christ a thousand years. The rest of the dead did not come to life until the thousand years were ended. This is the first resurrection. Blessed and holy are those who share in the first resurrection. The second death has no power over them, but they will be priests of God and of Christ and will reign with him for a thousand years.

When the thousand years are over, Satan will be released from his prison and will go out to deceive the nations in the four corners of the earth — Gog and Magog — and to gather them for battle. In number they are like the sand on the seashore. They marched across the breadth of the earth and surrounded the camp of God’s people, the city he loves. But fire came down from heaven and devoured them. And the devil, who deceived them, was thrown into the lake of burning sulfur, where the beast and the false prophet had been thrown. They will be tormented day and night for ever and ever.

“This was the dream, and now we will interpret it to the king. Your Majesty, you are the king of kings. The God of heaven has given you dominion and power and might and glory; in your hands he has placed all mankind and the beasts of the field and the birds in the sky. Wherever they live, he has made you ruler over them all. You are that head of gold.

“After you, another kingdom will arise, inferior to yours. Next, a third kingdom, one of bronze, will rule over the whole earth. Finally, there will be a fourth kingdom, strong as iron—for iron breaks and smashes everything—and as iron breaks things to pieces, so it will crush and break all the others. Just as you saw that the feet and toes were partly of baked clay and partly of iron, so this will be a divided kingdom; yet it will have some of the strength of iron in it, even as you saw iron mixed with clay. As the toes were partly iron and partly clay, so this kingdom will be partly strong and partly brittle. And just as you saw the iron mixed with baked clay, so the people will be a mixture and will not remain united, any more than iron mixes with clay.

“In the time of those kings, the God of heaven will set up a kingdom that will never be destroyed, nor will it be left to another people. It will crush all those kingdoms and bring them to an end, but it will itself endure forever. This is the meaning of the vision of the rock cut out of a mountain, but not by human hands—a rock that broke the iron, the bronze, the clay, the silver and the gold to pieces.

“The great God has shown the king what will take place in the future. The dream is true and its interpretation is trustworthy.”