Wedding of the Lamb

Do not let your hearts be troubled. You believe in God; believe also in me. My Father’s house has many rooms; if that were not so, would I have told you that I am going there to prepare a place for you? And if I go and prepare a place for you, I will come back and take you to be with me that you also may be where I am.  (John 14, 1-3)

(Thru all tests we have to hold on to the Word of God. Our comfort is that our Lord Jesus soon arrives to pick up his bride, bought with his own blood. Let the Word of Christ dwell among you richly as Paul challenges us to in the letter to Colossians 3, 16).

Since you have kept my command to endure patiently, I will also keep you from the hour of trial that is going to come on the whole world to test the inhabitants of the earth.

I am coming soon. Hold on to what you have, so that no one will take your crown. The one who is victorious I will make a pillar in the temple of my God. Never again will they leave it.

Then I saw a new heaven and a new earth, for the first heaven and the first earth had passed away, and there was no longer any sea. I saw the Holy City, the new Jerusalem, coming down out of heaven from God, prepared as a bride beautifully dressed for her husband. And I heard a loud voice from the throne saying,

“Look! God’s dwelling place is now among the people, and he will dwell with them. They will be his people, and God himself will be with them and be their God. He will wipe every tear from their eyes. There will be no more death or mourning or crying or pain, for the old order of things has passed away.

He who was seated on the throne said, “I am making everything new!” Then he said, “Write this down, for these words are trustworthy and true.”  He said to me: “It is done. I am the Alpha and the Omega, the Beginning and the End. To the thirsty I will give water without cost from the spring of the water of life.

Those who are victorious will inherit all this, and I will be their God and they will be my children. But the cowardly, the unbelieving, the vile, the murderers, the sexually immoral, those who practice magic arts, the idolaters and all liars – they will be consigned to the fiery lake of burning sulfur. This is the second death.”

One of the seven angels who had the seven bowls full of the seven last plagues came and said to me, “Come, I will show you the bride, the wife of the Lamb.”  And he carried me away in the Spirit to a mountain great and high, and showed me the Holy City, Jerusalem, coming down out of heaven from God. 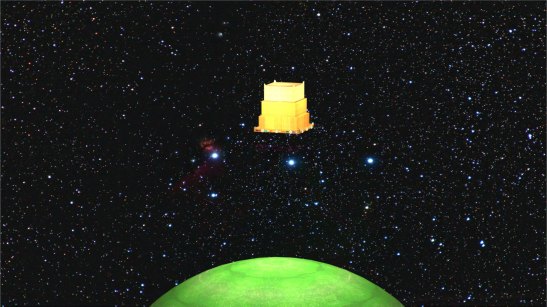 (Image:  A huge and shining city comes out of space and down to the new earth).

It shone with the glory of God, and its brilliance was like that of a very precious jewel, like a jasper, clear as crystal. It had a great, high wall with twelve gates, and with twelve angels at the gates. On the gates were written the names of the twelve tribes of Israel. There were three gates on the east, three on the north, three on the south and three on the west. The wall of the city had twelve foundations, and on them were the names of the twelve apostles of the Lamb.

(Image:  Cube or stairway pyramid?  The book of Revelations tells nothing about any stairway pyramid. In the temple of Solomon was the Most Holy shaped like a cube, according to book of 1. Kings 6, 20).

The angel who talked with me had a measuring rod of gold to measure the city, its gates and its walls. The city was laid out like a square, as long as it was wide. He measured the city with the rod and found it to be 12,000 stadia in length, and as wide and high as it is long. The angel measured the wall using human measurement, and it was 144 cubits thick. The wall was made of jasper, and the city of pure gold, as pure as glass.

(Image:  Could it be something like this described in the book of Revelations chapter 20?  Many persons have seen the new Jerusalem as a building of 3 giant floors. For example the chinese street-children that missionary Harold Baker took care of).

The foundations of the city walls were decorated with every kind of precious stone. The first foundation was jasper, the second sapphire, the third agate, the fourth emerald, the fifth onyx, the sixth ruby, the seventh chrysolite, the eighth beryl, the ninth topaz, the tenth turquoise, the eleventh jacinth, and the twelfth amethyst. The twelve gates were twelve pearls, each gate made of a single pearl. The great street of the city was of gold, as pure as transparent glass.

The 12 gems are probably placed in layers, like a horizontal rainbow with 12 colors. The artist have to remake this image.

I did not see a temple in the city, because the Lord God Almighty and the Lamb are its temple. The city does not need the sun or the moon to shine on it, for the glory of God gives it light, and the Lamb is its lamp. The nations will walk by its light, and the kings of the earth will bring their splendor into it. On no day will its gates ever be shut, for there will be no night there. The glory and honor of the nations will be brought into it. Nothing impure will ever enter it, nor will anyone who does what is shameful or deceitful, but only those whose names are written in the Lamb’s book of life.

Then the angel showed me the river of the water of life, as clear as crystal, flowing from the throne of God and of the Lamb down the middle of the great street of the city. On each side of the river stood the tree of life, bearing twelve crops of fruit, yielding its fruit every month. And the leaves of the tree are for the healing of the nations. No longer will there be any curse.

The throne of God and of the Lamb will be in the city, and his servants will serve him. They will see his face, and his name will be on their foreheads. There will be no more night. They will not need the light of a lamp or the light of the sun, for the Lord God will give them light. And they will reign for ever and ever.

I, Jesus, have sent my angel to give you this testimony for the churches. I am the Root and the Offspring of David, and the bright Morning Star.”

After this I heard what sounded like the roar of a great multitude in heaven shouting:

For our Lord God Almighty reigns.

Let us rejoice and be glad and give him glory!

For the wedding of the Lamb has come,
and his bride has made herself ready

Fine linen, bright and clean, was given her to wear.”

Then the angel said to me, “Write this: Blessed are those who are invited to the wedding supper of the Lamb!”

If you start north in Denmark and drive against south, 2220 km, then you end up in the north of Spain).

This entry was posted on 26/12/2013 by Skriveren in Lamb, Sacrifice and tagged Heaven, Jesus, Lamb of God, new jerusalem.